Note: This article was originally written for NuCypher.

The first FHE scheme was successfully created in 2009 by Craig Gentry. Since then, there have been numerous proposed FHE schemes and a dearth of related work in the space. However, there’s little explanation as to why all this work is being done or the motivation for any of it. When I first started learning about FHE, I had many questions: Why are there so many schemes? Is FHE being used in any major application right now? If FHE is as powerful as described, why hasn’t it taken off yet?

We’ll start by providing an introduction to how FHE works and some areas in which it might be useful. The meat of the article is in the 2nd section where we consider why FHE has yet to have received widespread attention and some potential solutions to these issues. The TL;DR of it is that there is a complete lack of usability when working with FHE libraries currently. All of the inner workings and complexities of the FHE scheme—of which there are many—is exposed to the engineer.

Finally, we’ll link to some FHE libraries if you’re interested in getting your hands dirty.

What is fully homomorphic encryption?

Fully homomorphic encryption is a type of encryption scheme that allows you to perform arbitrary* computations on encrypted data.

* Not completely true but we’ll leave that out for now

Let’s start with a brief review of encryption schemes. Plaintext is data in the clear (i.e. unencrypted data) whereas ciphertext is encrypted data.

Algorithms in an Encryption Scheme

In a private key encryption scheme, the same key is used to both encrypt and decrypt. That means anyone who can encrypt plaintext (i.e. data in the clear) can also decrypt ciphertext (i.e. encrypted data). These types of encryption schemes are also referred to as “symmetric” since the relationship between encryption/decryption is symmetric.

However, in a public key encryption scheme, different keys are used to encrypt and decrypt. An individual may be able to encrypt data but have no way of decrypting the corresponding ciphertext. These types of encryption schemes are also referred to as “asymmetric” since the relationship between encryption/decryption is asymmetric.

You may have heard of the ElGamal encryption scheme before (which is based on the Diffie-Hellman key exchange). These schemes are usually taught in an introductory cryptography course and rely on a commonly used type of cryptography called elliptic curve cryptography.

So what’s the “homomorphic” part mean?

Specifically, in a “homomorphic encryption scheme,” the following relationships hold:

So just by knowing Encrypt(x) and Encrypt(y), we can compute the encryption of more complicated polynomial expressions.

How does it work? What’s the intuition?

It’s your job to correctly set all parameters of the scheme, perform “noise control” operations at the right time (we won’t go into what these operations are in this article since they can even differ by scheme), and try not to do too many homomorphic multiplications. Does that sound intimidating to you? You’re in good company then.

Note: There are some ways of getting around the fixed noise ceiling such as “bootstrapping.” Bootstrapping comes with its own set of complexities and trade-offs however.

Simply put, lattices sit inside the real vector space (otherwise known as R^n) and can be represented using vectors and matrices (which you definitely should have familiarity with!).

* Not an exhaustive list of schemes! I’ve just listed some well-known ones.

Why do we care about any of this?

Private Transactions on a Public Ledger (e.g. blockchain). A private transaction scheme allows a user to securely send digital currency to some recipient without revealing the amount being sent to anyone (apart from the intended recipient) on a public, distributed ledger. This is in contrast to cryptocurrencies like Bitcoin where transactions and balances are all public information.

We assume a (public key) fully homomorphic encryption scheme. All encryptions are done with respect to the Receiver’s keys.

This can be extended to more interesting financial applications such as auctions, voting, and derivatives. An FHE scheme that models computation as modular arithmetic is likely to be the most suitable for this type of application.

Note: For this to work in practice, some other cryptographic tools are also needed (such as zero-knowledge proofs).

Private Machine Learning. There’s been increased interest in the last few years around how we might be able to “learn” from data (via machine learning) while still keeping the data itself private. FHE is one tool that can help us achieve this goal. In contrast to the previous application, we likely want an FHE scheme that models computations as floating point arithmetic here.

Homomorphic encryption is not the sole solution to this problem; differential privacy is a closely related subject that has garnered a lot of attention. Differential privacy is more statistics than cryptography as it does not directly involve encryption/decryption. It works by adding noise to data in the clear while still guaranteeing that meaningful insights can be drawn from the noisy data sets. Apple is one major company that purportedly uses differential privacy to learn about your behavior while maintaining some level of privacy.

Why FHE Hasn’t Taken off Yet: Challenges in the Space

So far this all sounds great but I’ve been leaving out a number of problems.

Many Different Schemes (aka everyone is speaking a different language)

So you’ve decided you want to use FHE, great! Here’s some considerations that now need to be taken into account:

FHE schemes model computation in one of three ways—as boolean circuits, modular arithmetic, or floating point arithmetic. Hopefully it’s obvious which model you need since there aren’t many resources beyond introductory ones like this to help you out. This question is likely the least of your concerns though.

Hmm, that’s unfortunate. There isn’t much work explaining the tradeoffs between different schemes with the same computational model. You’ll probably have to play around with the various schemes and implement your specific use case with both of them to determine which is best. There are some very involved research papers (such as this) that you can try wading through.

Kind of but not really. Different schemes tend to use different techniques to control efficiency and noise growth that you’ll need to understand to successfully work with FHE. Additionally, the schemes have different parameters you need to understand in order to set them properly. The parameters affect not only the security of the scheme (which is a given in cryptography), but also the sorts of plaintexts you can work with, the number of homomorphic computations you can do, and the overall performance of the scheme.

Does this picture* help? 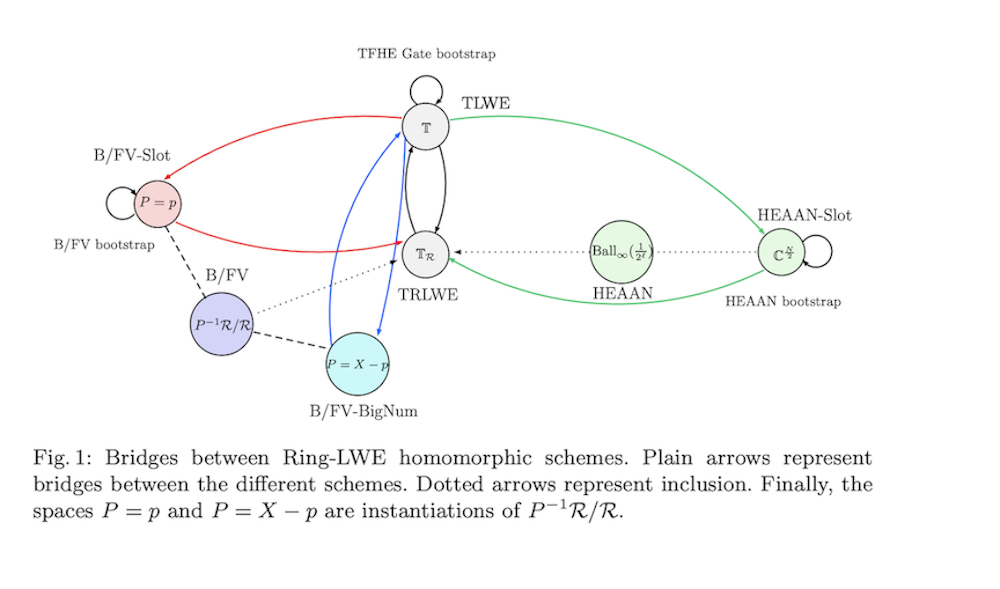 Having a lot of choices is great!

But it’s not great when:

A large issue is the lack of up-to-date benchmarking efforts. It’s hard to recommend which FHE scheme to use for a particular use case when we don’t know how one implementation performs against another (on the same machine, for a particular set of comparable parameters). FHE libraries change quickly, incorporating new optimizations, so benchmarking efforts from 1-2 years ago quickly lose relevancy (such as this from 2018 for various implementations of the BFV scheme).

Without up-to-date benchmarking of different schemes and libraries, it’s impossible to provide good resources that explain the tradeoffs between the FHE schemes in practice. There have been some presentations (such as this one) that try to illuminate the differences between the 3 computational models in FHE. However, there aren’t any good resources to help when trying to choose between different schemes using the same computational model.

If there were some interoperability between different FHE schemes, it would be easier to understand how the schemes relate to one another. An academic work on this topic is CHIMERA which provides a framework for switching between TFHE (boolean), BFV (modular arithmetic), and HEAAN (floating point arithmetic). Unfortunately, this work requires a very strong background in abstract algebra along with good familiarity of all the FHE schemes used. More accessible resources explaining the relationship between the different types of schemes would be nice (by “type” we mean the 3 types of computational models—boolean, modular arithmetic, floating point arithmetic.

* Image is from CHIMERA’s paper

Efficiency (more complex of an issue than it seems)

Personal rant aside, we’re going to look at some considerations you have to take into account for efficiency with FHE.

he larger the plaintext space, the slower it will be to perform operations. For FHE schemes that model computation as modular arithmetic, choosing a modulus on the order of 1000 vs. 1,000,000 makes a large difference in terms of what plaintexts you can represent. This might be especially important if you’re representing account balances with your ciphertexts and need to ensure they don’t “wrap around” the modulus.

Some FHE schemes can take advantage of “SIMD” style operations to perform the same operation on multiple plaintexts or ciphertexts simultaneously. If this sort of parallelization is useful for you, you should consider exploring schemes and libraries that offer this functionality. SIMD-style operations, if used correctly, can really improve efficiency.

With TFHE, for example, some keys you’ll need to access in the scheme can be 1 GB large! The performance, in terms of timings, may be decent but you’re instead left with a giant key you need to store.

Some FHE schemes can be accelerated using GPUs; examples of such libraries include nuFHE and cuFHE. Other efforts to accelerate FHE schemes have included using FPGAs (e.g. HEEAX). HEEAX works with the CKKS scheme (floating point arithmetic) and can yield performance speed-ups of anywhere from 12x to over 250x depending on the specific operation. Unfortunately, the paper suggests that a FPGA-based approach is not as successful for the BFV scheme (integer arithmetic).

Easier said than done of course.

Usability (there is none)

The previous discussion leads us to our final point—usability. FHE is not beginner-friendly, not user-friendly, and certainly not non-cryptographer-friendly. There really isn’t any usability for an engineer lacking a math or cryptography background.

Most FHE libraries require deep expertise of the underlying cryptographic scheme to use both correctly and efficiently. Another cryptographer has described working with FHE as similar to writing assembly— there’s a huge difference in performance between good and great implementations. Wading through libraries like HElib can be intimidating without a strong background in the underlying scheme.

Is the situation really that bad?

By this, we mean standards to make it clear what parameters to use, what functionalities are offered, etc.

Standardization efforts are currently led by the open industry/government/academic consortium “Homomorphic Encryption Standardization.” They’ve already released draft proposals around security and API standards for homomorphic encryption. They tend to meet 1-2x a year if you’re interested in attending their meetings.

One example of this is Microsoft’s SEAL which has an incredibly instructive examples section. Hopefully more libraries will take the time to create user-friendly documentation and examples.

There have been discussions in the FHE community for awhile now about creating a compiler or some intermediate representation to make FHE easier to work with. Cingulata is one such attempt.

What’s the takeaway from all of this?

You know that cliche breakup line “it’s not you, it’s me?” Well, that’s particularly true here.

High-level programming languages have helped to abstract away a lot of the complexity of how your computer works. But there is no analogue of “high-level programming languages” when working with FHE. You can’t abstract away any of the complexities (of which there are a lot). Although standardization is ongoing and there are efforts to make FHE more beginner-friendly, FHE just isn’t ready to be used by non-cryptographers at the moment in a production-ready environment.

Show me the code!

If you do not have previous experience with FHE, we recommend starting with a more user-friendly library such as SEAL.

Some libraries (such as SEAL and PALISADE) offer multiple types of FHE schemes. To prevent confusion, we list the specific FHE scheme in paratheses after the library’s name.